There’s also a name for the next full moon after the Harvest Moon. It’s called the Hunter’s Moon, and it’ll come this year on October 29.

Officially, the crest of the full Harvest Moon will happen on September 29, 2012 at 10:19 p.m. CDT (3:19 on September 30 UT). Depending upon your time zone, the full moon will be September 29 or 30. But the moon will appear round and full on all the nights around this full moon–the perfect time for a full moon hike! Have fun along the way by making shadow creatures and identifying sounds! Nature looks a lot different at night. See what senses are keenest at nigh! Exploring these differences with your little one’s can be an educational and playful experience.

So don’t just look for the Harvest Moon on the night of September 29 or 30. Look for the moon to be bright and full-looking for several nights at the end of September, 2012. If you live far enough north – for example, in the northern states, Canada or Alaska – the Harvest Moon will continue to shine from dusk until dawn into early October! This procession of moonlit nights is what characterizes the Harvest Moon.

Take this weekend to teach your little ones more about the moon phases with this fun and tasty activity:

Why is the Harvest Moon special?

On average, the moon rises about 50 minutes later each day. But when a full moon happens close to the autumnal equinox, the moon (at mid-temperate latitudes) rises only about 30 minutes later daily for several days before and after the full Harvest moon. Why? The reason is that the ecliptic – or the moon’s orbital path – makes a narrow angle with the evening horizon around the time of the autumn equinox. The narrow angle of the ecliptic results in a shorter-than-usual rising time between successive moonrises around the full Harvest Moon.

These early evening moon rises are what make every Harvest Moon special. Every full moon rises around sunset. After the full Harvest Moon, you’ll see the moon ascending in the east relatively soon after sunset for several days in a row at northerly latitudes. The lag time between successive moon rises shrinks to a yearly minimum, as described in the paragraph above. Because of this, it seems as if there are several full moons – for several nights in a row – around the time of the Harvest Moon.

Want to know the time of moonrise in your location? Check out this Custom Sunrise Sunset Calendar tool! Once you get to that page, be sure to click the box for ‘moon phases’ and ‘moonrise and moonset times.’

Is the Harvest Moon bigger, or brighter or more colorful?

Not necessarily, but the actual size of the Harvest Moon depends on the year. The Harvest Moon has the reputation of being especially big and bright and orange. But it isn’t really the Harvest Moon’s size or brightness that distinguishes it from other full moons. In fact, the 2012 Harvest Moon is a touch smaller than an average-sized full moon.

Still, you might think otherwise. That’s because the Harvest Moon has such a powerful mystique. Many people look for it shortly after sunset around the time of full moon. After sunset around any full moon, the moon will always be near the horizon. It’ll just have risen. It’s the location of the moon near the horizon that causes the Harvest Moon – or any full moon – to look big and orange in color.

The orange color of a moon near the horizon is a true physical effect. It stems from the fact that – when you look toward the horizon – you are looking through a greater thickness of Earth’s atmosphere than when you gaze up and overhead. The atmosphere scatters blue light – that’s why the sky looks blue. The greater thickness of atmosphere in the direction of a horizon scatters blue light most effectively, but it lets red light pass through to your eyes. So a moon near the horizon takes on a yellow or orange or reddish hue.

The bigger-than-usual size of a moon seen near the horizon is something else entirely. It’s a trick that your eyes are playing – an illusion – called the Moon Illusion. You can lengthy explanations of the Moon Illusion by googling those words yourself.

How the Harvest Moon got its name

So why is this moon – the moon closest to the autumnal equinox – called the Harvest Moon?

The shorter-than-usual time between moonrises around the full Harvest Moon means no long period of darkness between sunset and moonrise for days in succession. In the days before tractor lights, the lamp of the Harvest Moon helped farmers to gather their crops, despite the diminishing daylight hours. As the sun’s light faded in the west, the moon would soon rise in the east to illuminate the fields throughout the night.

Who named the Harvest Moon? That name probably sprang to the lips of farmers throughout the Northern Hemisphere, on autumn evenings, as the Harvest Moon aided in bringing in the crops. The name was popularized in the early 20th century by the song below.

Shine On Harvest Moon
By Nora Bayes and Jack Norworth (1903)

Teaching Children to Care for the Earth 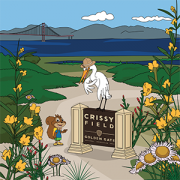 Why Parks are so Important for Kids

The Importance of Play